‘Dust’ is a multimedia project combining photographs, video art and original music composition by visual artist Costas Papageorgiou. It is based on a play of the same title by Eleni Chatzi and the narration is by Olia Lazaridou, Nikos Xidakis and Tina Yiotopoulou. 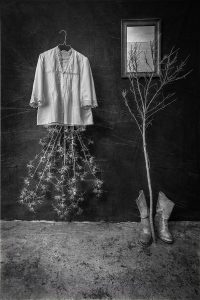 Costas Papageorgiou is a photographer and visual artist based in Greece and Dust – Σκονη (skoni) – a multiform project of photographs and video art – is together with author Eleni Chatzi their first online exhibition presented by the Hellenic Centre. Papageorgiou has taken part in many photography and visual art exhibitions in Greece, Cyprus and Austria, while he has also written music for the theatre.

Dust – Σκονη, is based on the homonymous play by author Eleni Chatzi and inspired by a true story that took place in the USA during a period of prolonged drought in the times of the Great Depression. Costas Papageorgiou transforms through symbolism all the agony, hardship and tribulations that were thrown upon the two characters into a clear reflection of the miseries one could face nowadays.

I wrote the play ‘Dust’ inspired by the true story of Caroline and Will Henderson (1877-1965) – born in the same year and dying just a few months apart. Caroline and Will were farmers in Oklahoma, USA in the 1930s, during the years of the Great Depression and the “Dust Bowl”, a time when dust covered the Midwestern and Southern states and turned them into a vast desert.

Prolonged drought and human errors caused soil erosion; the strong winds caused whirlwinds, dust storms and black blizzards. The cities were deserted. People and animals were dying of suffocation, houses and machinery were buried in dust, insects and rodents were destroying whatever few crops had remained. Despite all these, Caroline and Will refused to leave their land and chose to stay and fight.

These two heroes became for me symbols of earth’s devastation, of internal desolation and of a will to live that knew no limits. Their story is our present and the landscapes, faces, sounds and lost dreams of our own reality.

“human beings operate like conductors. They each take what they need as determined by time or prevailing conditions but also as determined by a place of location, which could be external or within themselves. It appears that two such people, Caroline and Will, were hiding deep inside me and were forced to reveal themselves when Eleni Chatzi gave them a name in her play ‘Dust’.

From the very first reading, the words and the printed pages, became condensed and transformed themselves into the necessity of artistic expression.

‘Dust’ is an abstract ‘static performance’ which start with Caroline’s straw broom on the dusty wooden floor of an Oklahoma farmhouse and reaches our days travelling on Will’s Model-T wagon.

The struggles, the worries, the disappointment of these two people underwent a symbolic transformation and became images and sound landscapes which in turn, like an oxidised mirror, reflect our present.”

Photographs of the 'Dust' project