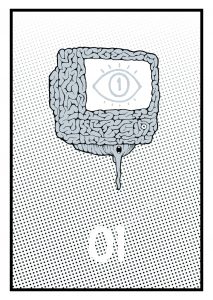 Once we unravel a skein, we end up with a thread, a single line, and once we gather that line up, we have a new, single-line design. Then maybe, everything is relevant? And why not weave with our line? What will we end up with? What will we create? What will that mean to the person next to us? Everything IS relevant!
Human beings in a mob.
What is a mob to a king?
What is a king to a god?
What is a god to a non-believer?

Our single-line design is the human being, the mob, the king, the god and the non-believer.

It is like a DNA sequence, a single shape, yet many shapes. It forms monsters, dreams, ambitions, vanity, actions, characters, images and a plethora of concepts, which, like the skein becoming an embroidery, unravel and come together like the aspects of our own selves.

Press play to watch a compilation of 7 short clips (edited by the artist) on human interactions in the digital era.

Minas Kampasis was born on 21 October, 1992 in Athens and grew up on the Island of Antiparos in Cyclades, Greece. From a very young age he loved to paint, especially with finger paints, covering both paper and walls. Growing up, his field of interest shifted many times, but his medium was always the same, paper and pencil. In June 2010 he graduated from the general high school of Paros and moved to Athens to attend freelance design classes with the aim of being admitted to the School of Fine Arts. Five months later he achieved his goal and is now a graduate of the school. In 2018 he moved to Amsterdam where he lived until 2020 when he returned back to Greece. The source of inspiration for him is the concept of neighbourhood and everyday life in it, regardless of scale; either it is about a galaxy or a city or an anthill, how the smallest elements have a separate and changing meaning for each of us and how their relativity affects us. His other interests are architecture, especially medieval, graphic design, comics, travel and he loves animals very much. He is based in Athens, where he lives with his dog, Leda.

Connect with the artist: