Premiere of Bouboulina (Kostas Andritsos, 1959) with English subtitles with an introduction by Dr Lydia Papadimitriou.

Starring Irene Papas in one of her early, but highly influential roles, Bouboulina is the only biopic of the notorious heroine and one of the relatively few historical films on the Greek Revolution. A low-budget production and a labour of love for its unassuming director-editor Kostas Andritsos, the film presents a chronological account of Laskarina Bouboulina’s life focusing on her free spirit, her mental and physical strength, and her dedication to the cause of national liberation.

Image caption: Irene Papas as Bouboulina gives an inspirational speech at the launch of the Revolution. Still from Bouboulina reproduced with permission from Alexis Andritsos and Panagiotis Kakavias.

Organised by the Centre for Hellenic Studies at King’s College London, the Society for Modern Greek Studies and supported by The Hellenic Centre 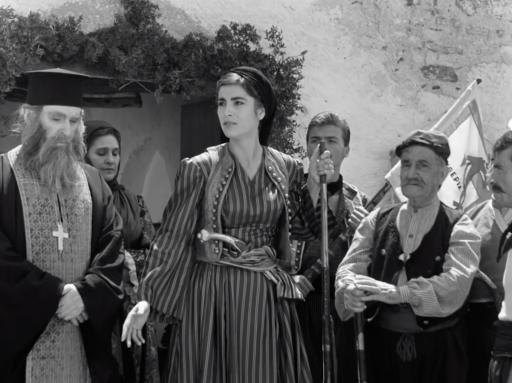 Life After Life: Greeks of Istanbul

Film screening of “Life After Life: Greeks of Istanbul” by Dr. Gonul Bozoglu & Cem Hakverdi and a follow-up discussion with Dr Gonul Bozoglu who produced and co-directed it. Dr. Bozoglu will also talk about the ‘memory map’ project she has been developing as part of her research, a repository of histories and memories of the Greek ‘Rum’ Community of Istanbul.

Organised by The Association of Constantinopolitan Greeks in the UK (ACGUK) and The Hellenic Centre.