Under the stars – Οι κάτω απ’τ’αστέρια

Prosopa Events and Alfa Idea are delighted to present the theatre play “Under the stars – Οι κάτω απ’ τ’ αστέρια” for two shows in London, followed by one in Manchester and one in Amsterdam.

A unique play, written, directed and performed by very talented and awarded young Greek actors. A play that will bring you memories from summer romances of your youth.
For more information: www.prosopaevents.com
**Performed in Greek, surtitles in English**
**Tickets from £17**

“Under the stars – Οι κάτω απ’ τ’ αστέρια”
Late 80s, early 90s. Small Greek town on an Aegean island. Menita and Nickolis go to the same school, spend their summer holidays together, dream together, make love, fall in love “for ever”. But years go by and – as it happens – reality prevails.

Despite their choices, Menita and Nickolis still leave their mark on each other. Among them, there is a wildfire burning.

This is the final showdown of two lovers trapped by their choices. This is their final meeting full of emotion, humour, conflict and nostalgia. A bittersweet story about great expectations and harsh reality, about leaving behind the sunny beaches and Greek summers of the age of innocence, about falling in love and growing up “under the stars”.

“In your eyes, something dark was shining. But the butterflies in my stomach kept on tickling me. And, in these cases, butterflies never get it wrong” 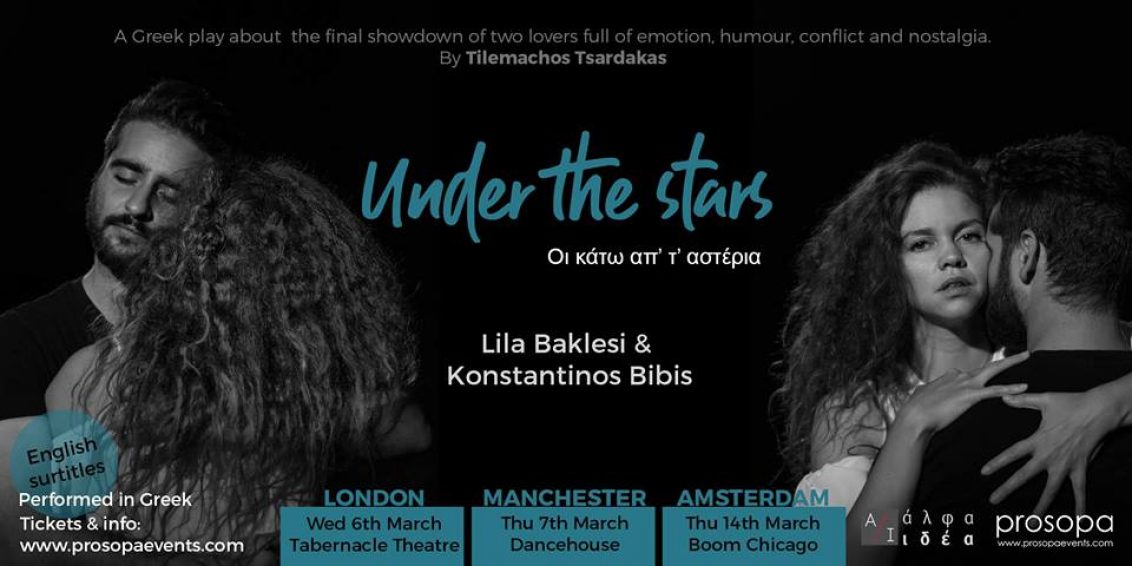