The photographs I am presenting at the Centre are major and minor Hellenic archaeological sites, and the project is ongoing. The photographic method is the cyanotype, and the framed photographs are up to 100cm in size. Most were produced during the 2020 lockdown in my garden in London.

Cyanotype is a very early method of producing photographic images on to paper, and historically had two uses; botanists were able to record their finds photographically, in the field and without the use of a camera. Secondly, it was a means to reproduce architectural drawings on location at the construction site without a mechanical or darkroom print process. Reversed in negative with white lines on a blue background, it became the architectural blueprint, and an essential vehicle in designing the built environment.

As a reprographic method, it is extremely simple but very difficult to get right, especially at a large size. It’s a contact process, requiring a negative the size of the desired print. An emulsion made from of two chemicals is applied to paper. The negative is placed onto the sensitized paper, under glass, in sunlight or under an ultraviolet light source. After exposure of between fifteen minutes and two hours, the paper is washed and dried, giving the characteristic blue print. The difficulty comes from the many variations within the process; the proportions of the mix of the two chemicals, the method of application, the type of paper, the intensity of the light source and the thoroughness of the end wash to remove chemical excess. The negative has to be of high contrast to balance the low contrast of the cyanotype print. Subtle gradations of tone and detail tend to get lost, so selecting the ‘right’ image to turn into the cyanotype has to be carefully considered. Not all images work well therefore as cyanotypes, but each print is unique, a one-off.

Simple and strong images work well, such as the remaining pillars of the Olympia, the Temple of Poseidon at Sounio or stone steps at Agia Triada in Crete. Imperfections are part of the process, as are the brushstrokes and the tape marks from attaching negative to paper. They are a reminder that photographic image-making remains a physical process now, and when architectural technicians first worked on site, laboriously to produce the plans by which great buildings could be designed and built.

The unique original photographs will be for sale, as will high-qualityprinted copies.
– Benedict Luxmoore

Benedict Luxmoore is an architectural photographer from London with over thirty years of experience photographing the built environment for architectural practices, engineers and construction companies. He went to the Slade School of Fine Art in London between 1981 and 1985 and spent a number of years afterwards creating exhibitions and installations combined lighting and photography. He moved away from an art practice to commercial photography around 1993, and this is his first return to exhibiting after thirty years. 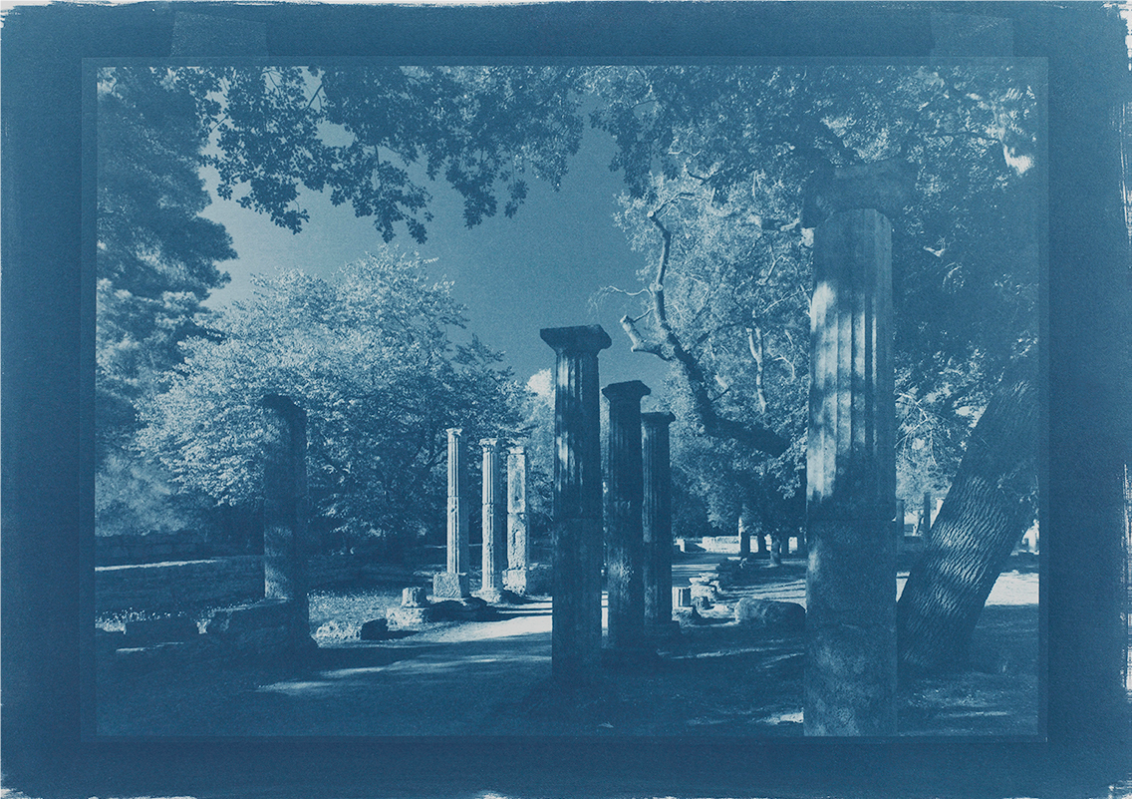