MANI / Μάνη – Painting the Southern Peloponnese: In the Footsteps of Patrick Leigh Fermor

For opening hours during the exhibition call The Hellenic Centre, as space may be booked for private events.

I was always fond of John Craxton’s cover illustrations for Patrick Leigh Fermor’s travel books, but had not really understood the longstanding connection between these two men or their mutual love for Greece until Ian Collins’ retrospective exhibition and monograph on Craxton in 2011. It unveiled a remarkable series of luminous paintings, many in tempera, that seemed to distil the essence of Greek landscape and life (Cretan in particular). Their linear form owes much to Modernism, but also to the close study of Byzantine painting and the mentoring of Greek painter Nikos Hadjikyriakou-Ghika, a lifelong friend to both Craxton and Leigh Fermor. This creative fellowship played out during the second half of the 20th century moving between their homes on Crete, Hydra and the Mani peninsula and has just been celebrated in an exhibition called ‘Charmed Lives in Greece’ at the British Museum earlier this year.

I read ‘Mani, Travels in the Southern Peloponnese’ (written in Ghika’s house on Hydra) while visiting Kardamyli , where I found the Leigh Fermor house on a low cliff surrounded by olive and cypress trees. While walking in the nearby Vyros Gorge, I was transfixed by a tiny figure leading goats high up in the Taygetus mountains; a scene straight from the book of 60 years earlier. Partly because of the evocative writing, the paintings by Craxton and Ghika and because of the eerie beauty of this place, Mani cast a spell; it got under the skin. I decided to return and paint some of it for myself.
My plan was to walk in the footsteps of Leigh Fermor and in October 2017 I caught a bus with a friend, from Kalamata down the coast to Oitylo, where began a walk around the southernmost tip of the peninsula, known as ‘Mesa Mani’ or the ‘Deep Mani’.

During a three week trek, I made a number of pleinair studies on a route which took us over mountains, along treacherous cliffs and across plains baked by the sun. We slept out in olive groves, in abandoned war-towers, by derelict Byzantine churches and once on the very top of Mount Sagias under a full moon. On my return, I began to work a number of studies into larger paintings and made others in response to the experience and memory. They are my attempt to translate the sensation of being there, the physical harshness and aridity; the fierce sun, the empty space, the colours and light of this
unique place apart. 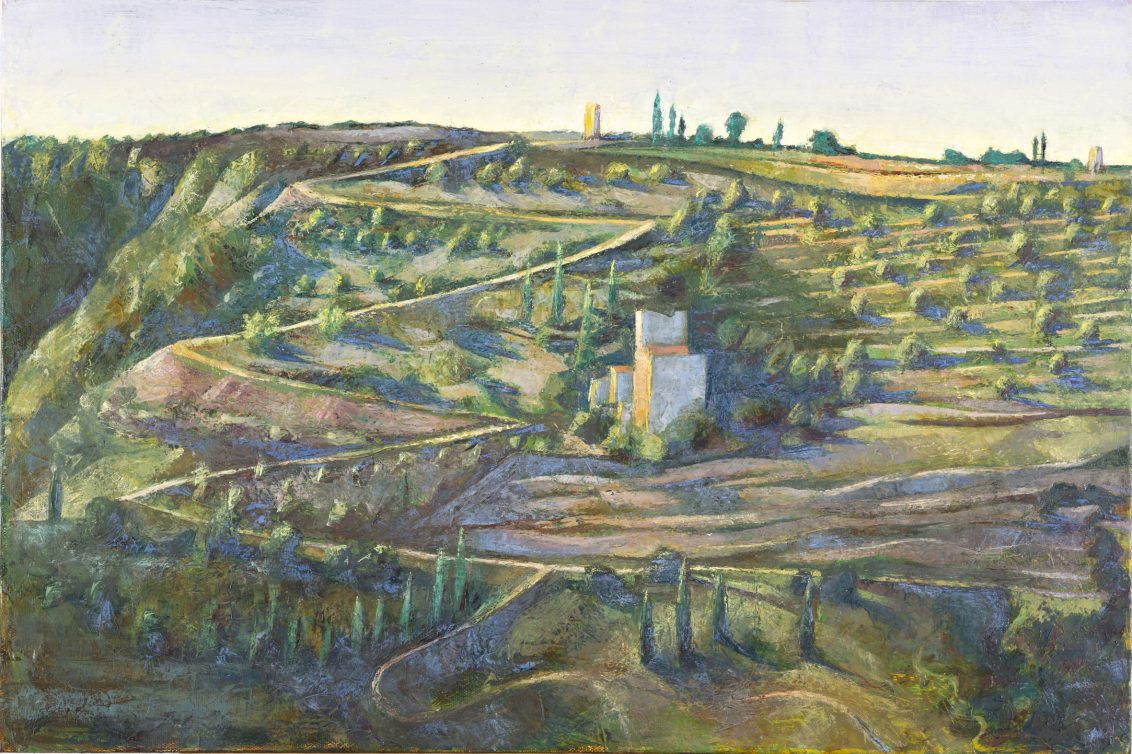