Tonia Theodorou began her  career in Italy after completing  her studies in Florence. Her creations are based on the two elements of movement and transformation. By using these two elements, she aims to help women of today change the shape of their jewellery according to any occasion and to their specific need.  The originality of Tonia’s work is that each design has its own story.

On March 9th 2006 the president of the Cyprus Organization of Business and Professional Women (B.P.W.),  awarded Tonia  with the certificate of Professional Woman of the year.  The event was hosted under the auspices of the Minister of Defense and the Cyprus Chamber of Commerce and Industry. Tonia Theodorou was nominated as one of the top five designers for the 2011 “Madame Figaro Awards”. Since 1992 she has been running her own shop in Limassol.  In 2010 Tonia, due to her deep love for art, expanded the first floor of her premises into an art gallery as “TONIA jewel & art gallery”.

Since the expansion, Tonia has hosted exhibitions for well-known artists as well as promoting and encouraging work from both local and international artists.  Tonia first started painting at the age of thirteen, but she hosted her first solo art painting exhibition on March 8th of 2015, Woman’s day.  The exhibition was inaugurated by the First Lady of Cyprus, Andri Anastasiades and the opening was by the ex-president of E.KA.TE (Cyprus Chamber of fine arts), Mrs.Daphne Trimikliniotis. On December 12th of the same year, Tonia hosted her second art painting exhibition with great success. On December of 2016, her shop’s 25th anniversary, she organized her 3rd solo art painting exhibition which was inaugurated by academic Mr.Mimis Sofokleous.   On September 2017, the Antwerp World Diamond Centre (AWDC) recognized TONIA Jewellers Ltd as a DnA Ambassador.

For news, details and samples of her work, click here 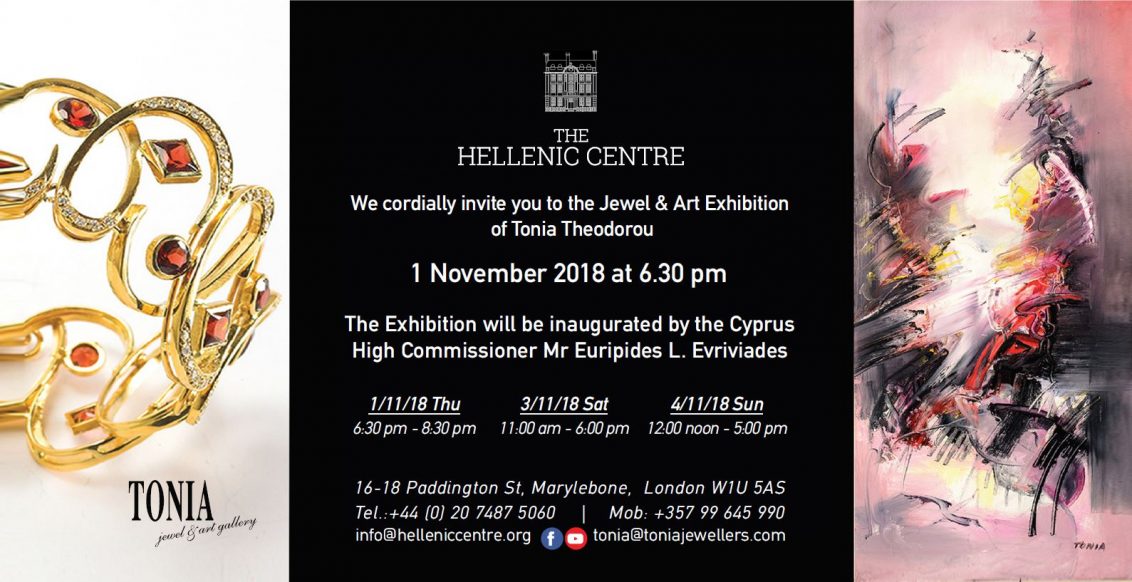