Τhe bibliography relating to Plato’s conception on language does not focus on any specialised exploring, proving and bringing into relief of the existence of a fundamental correlation between Plato’s linguistics and his metaphysics and his gnoseology. The studies that exist are, usually, studies on the subject, either, in general, of the Platonic theory of language, or of Plato’s Cratylus, without, indeed, any intended focus on the specific object of the “fundamental correlation” in question, or even, in other cases, without any acknowledgment at all of the existence of such a correlation, and, essentially, with its denial.

In contrast with this non-unifying approach, which exists traditionally, Eleni Papamichael’s book takes, as precisely the specific object of its research and as its specific aim, the proving and bringing into relief of the fact that indeed, and even of necessity, Plato’s linguistics is founded both on his metaphysics and on his gnoseology, and within, also, not only Cratylus, but within the whole, as well, of the Platonic oeuvre, in its entirety. Given this, that, consequently, which is aimed at and achieved essentially, in the pages of this book, is, through a clearly holistic approach, the setting into relief of the existence of unity between the metaphysics, the gnoseology and the linguistics, themselves, of Plato, in the Platonic dialogues. And naturally, that which, in this way, is proven at the same time, in the specific book, is also the necessity itself of adopting the holistic approach, as such, for the study of Plato’s conception of language. Through the defended proving of the foundation of the Platonic linguistics on Plato’s metaphysics and gnoseology, Papamichael’s book proves and supports, in other words, the position therefore, at once, that Plato’s conception of language cannot acquire any meaning autonomously, outside or separately from this foundation, and that, in consequence, this linguistic conception -in contrast with what traditionally occurs- should not be studied on its own as something autonomous, isolated from the foundation in question.

Over and above the setting into relief of the fundamental correlation between Plato’s metaphysics, gnoseology and linguistics, and of the reason for which, as well as of the way in which, this correlation exists, this book performs another interconnection as well: that interconnection, between the linguistic thought of Plato and the thought of some of the most important contemporary philosophers, who had, in particular, concentrated on the matter of language. Hence, that, as well, which is aimed at is to set into relief the way in which Plato’s conception on language laid, also, in the course of history, the foundations for the formulation, on the one hand, of the Philosophy of Language, as well as, on the other, of contemporary Linguistics.

At the same time, this book studies also those diverse ways in which Plato’s conception on language had, first of all, been, itself, an object of reception, both in antiquity and in the modern and contemporary age. In many cases, it offers criticism towards interpretations of various commentators on Plato, contrasting these interpretations with its own different positions. 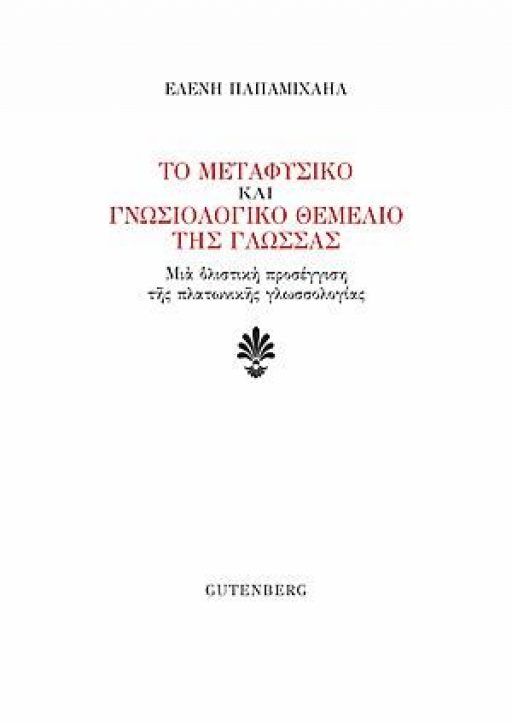