About the Hellenic Centre

Our aims and activities

There is a unique relationship between Britain and the Hellenic world. Establishing the Hellenic Centre in the heart of London has created a permanent place for it to be strengthened over more than twenty years now.

A usual day will see a variety of educational, social and commercial activities taking place across the Centre’s beautiful five-storey Portland stone and red-brick building. Lectures, seminars and language courses, social exhibitions, concerts and also commercial use of a number of meeting and exhibition rooms, including the magnificent Great Hall.

The Centre’s missions are to bring together the Hellenes of the diaspora and provide a home for the Hellenic community in London; to promote awareness of Hellenic culture in the UK; and to nurture the relationship between Britain and the Hellenic world through cultural cooperation and exchange.

We have over fifty cultural events a year, and over the years we have had some major exhibitions and special memories. The  2006 exhibition of Greek Embroideries from the collections of the Benaki Museum in Athens and the Victoria and Albert Museum in London, drew almost two thousand visitors and offered a dazzling example of the pleasures and possibilities offered by such ventures; to celebrate the 2012 Olympics in London, we had an exhibition of photographs from the First Modern Olympics which took place in Athens in 1896, a collection which then travelled on to Brazil for the 2016 Olympics; more recently the Patterns of Magnificence exhibition showcased Greek traditional costumes from the 18th to the early 20th century.

Our Greek language courses are attended by people from over forty nationalities. Among them and as part of that collaborative spirit, we place a high value on attracting new generations of Greeks, born here, who want to keep in touch with their roots, their language and their culture.

How the centre is run

As a project of the Hellenic Community Trust, the Hellenic Centre is overseen by the Trustees and their Executive Board, who are all volunteers. Full-time Director Agatha Kalisperas and her administrative support staff manage the Centre on a day to day basis.

The Centre is a non-profit, non-governmental organisation but has established close working relationships from the start with its three patrons, the Archbishop of Thyateira, the Ambassador of the Hellenic Republic and the High Commissioner for Cyprus.

Exhibit at the Hellenic Centre

Hellenic Centre Members can exhibit their work in the Friends Room free of charge. Our focus is on showing the work of Greek and Greek-Cypriot artists, or international art with a Hellenic theme. 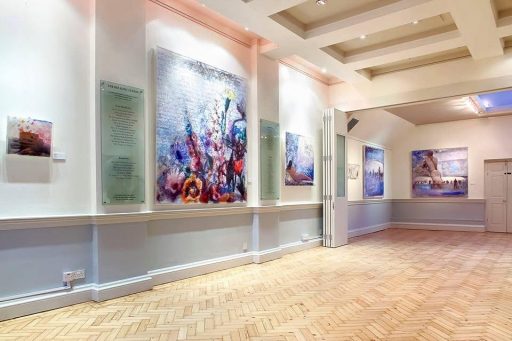 Membership helps ensure our future. It costs just £50 for individuals, £35 for people outside London, and £10 for under 18s.

Members receive the Diary of Events and invitations to special events, concessionary rates for our paid events and language courses, reserved seats and can attend our private views.

more about membership
Updates from the Director