Suggested donation of £5+ at the entrance is welcome.

Staged as a one-act, 50-minute long drama, ODYSSEUS. Red Rhapsody X revolves around one actor playing a range of roles – Homer the narrator, Odysseus, his son Telemachus, Athena the goddess dressed as Mentor  and several suitors. The actor accompanies the spoken language by an improvised phorminx – a string instrument made of  wire strings attached with magnets. The result is a primitive acoustic experience. Like in ancient drama, there are no octaves, only tetrads.

ODYSSEUS. Red Rhapsody X uses contemporary theatrical and technical means – industrial sounds and percussion,  inspired movements and a rain-machine – to stage the end of the saga for modern audiences. Homer’s poetry is performed in its original rhythmic form while overtitled in English allows spectators to follow what’s literally said. However, the aim of the show is to confront viewers with a highly physical performance and breathe life into an otherwise dead language.

Surviving a ten years’ war and an adventurous journey at sea, Odysseus comes home a stranger in rags and finds his palace taken over by strangers. Over a hundred suitors have occupied the grounds and surrounded his wife, while plotting to steal his throne and kill his only son. The hero devises a plan to take back what’s rightfully his, and that’s where ODYSSEUS. Red Rhapsody X begins. The Slaughter of the Suitors also known as Rhapsody 22 has been described as one of the most brutal, yet most gripping and richly symbolic pieces of world literature.

The final scene of the slaughter is yet another struggle in the Odyssey of struggles. “Reason wins over rage in the slaughter scene. What’s at stake is the quest for individuality and the self,” says actor/director Yiorgos Panteleakis. “The suitors’ names are symbolical. They stand for intrusive thoughts, obsessions, delusions or thinking errors – Antinous (“against reason”), Agelaus (“herd behavior”), Amphinomus (“contradictory”) and so on. Odysseus kills the mind’s chatter on the road to self-awareness.”

Meth’odo’s work is unique and rare as it performs Ancient Greek Drama in the original language based on the metric laws of Poesies. Complex and musical in its tone, the original dramatic language melts sound and meaning in a way that urges audiences to feel rather than think. The acoustic result could be close to how drama was experienced in ancient times, an issue that is still researched by dramatologists and linguists today.  Meth’odo’s approach is experimental. As such it does not aim at accurately reconstructing ancient drama. The group stages ancient dramatic texts as a visual-acoustic and kinesthetic experience for modern 21st century audiences. The theatrical and musical means used draw from percussion, improvised instruments, masks, contemporary and traditional body movement venues.

Actor, director Yiorgos Panteleakis studied Performing Arts at Essex College Balto,USA, at the Akis Davis Drama Lab in Athens, Greece and Physics at UMass Lowell, USA. Born in Athens Greece, left the country for the United States of America where he resided for eleven years. Founder of the theatrical Research group “Meth’odos” and “Independent Greek Cinema”.

He has been researching ancient Greek drama for the last 15 years and his experimental approach is unique in Greece. With Meth’odos he has produced and acted in three theater productions to date, including Ajax (2004) and Eumenides (2009) and ODYSSEUS. Red Rhapsody X.

It focuses in Art Films and Cinematic Documentaries on contemporary themes. Its aim is to redefine the compass of Independent filmmaking and audiovisual experience in an attempt to allow spectacle and spectators merge in a new level of awareness. It strives to involve itself in projects with a new approach of integration and fusion of the human experience.

“Experimental. Using masks and the Ancient Greek original text in a technical rhythmic articulation accompanied with percussion. You won’t understand the words, but the show is subtitled […]The intensity of the energy evoked by the actors and especially Yiorgos Panteleakis, the scenery, illuminated by Melina Mascha, and the aesthetic of the performance will keep you at the edge of your seat […] this performance was a revelation for me and a pleasant one.”

«Meth΄odos» group interprets through the laws of Metric the vibration-resonance of the ancient text and its translation in Prosody, creating vocal and orchistric schemes.

The aim is not the reenactment of Archaic poetry, but its contemporary expression in Vision and Sound. The actor and the interpretation made are an animated ideogram in which “Poetry” remains a living electrosized organism whole and sufficient. The work conducted is rear and authentic as there are few that involve themselves in a similar manner. 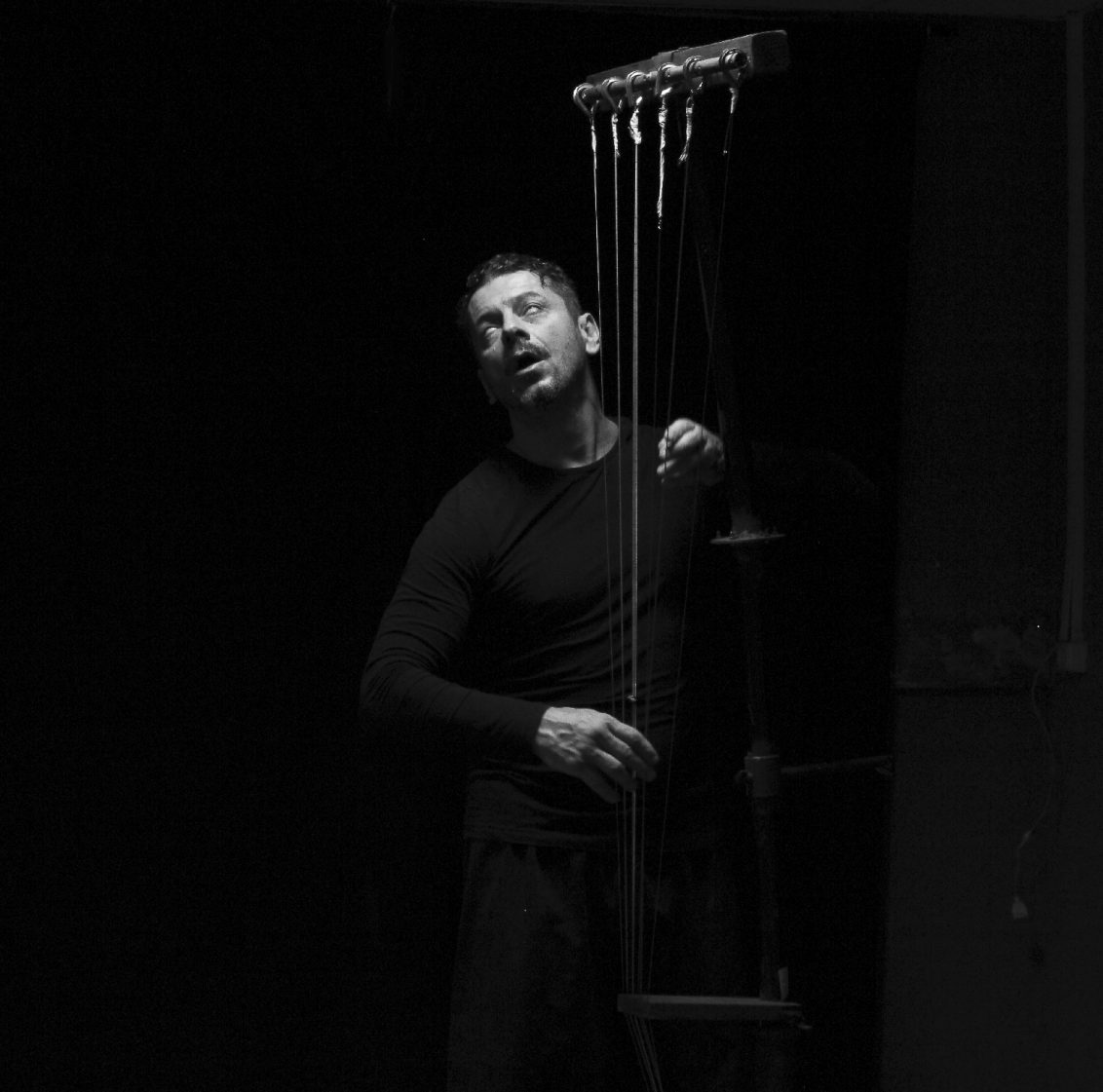